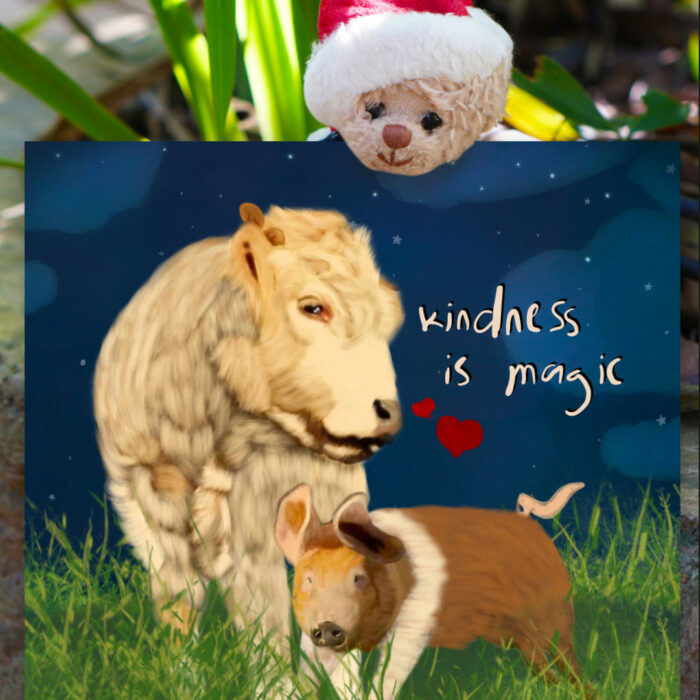 On the 3rd of October, I finally got the chance to visit one of the most beautiful places a plushie can visit. One place which, since I heard about it was at the top of my wishlist. It’s a place of kindness, compassion, and the peaceful coexistence of animals and humans.

It’s not some exotic place half a world away, it’s right around the corner, just a two-hour drive from where I live. However, it’s open for visitors only once a month and only between April and October, and because of the virus they had to cancel most of these days as well.

You probably guessed it by now that it’s an animal sanctuary and this one is very special to me, it’s called Erdlingshof. Freely translated it would mean Earthlings Farm in English. Earthlings are all beings that inhabit the earth.

They rescue cows, pigs, chickens, geese, sheep, goats, horses, donkeys…and give them a forever home where they can live their lives in peace. And I can tell you, they enjoy it to the fullest there. The scenery is beautiful, big green pastures, a forest, mud wallows, and comfy stables. It’s like a fairytale come to life.

Over a hundred lucky souls live there and you can see all kinds of different characters. Curious ones, shy ones, outgoing ones, and “I mind my own business” ones:). And some friendships that they make are hilarious. There is a goose Möp Möp whose best friend is Bonnie a pig and if you come too close to the pig the goose will show you who’s the boss:).

The current stars of Erdlingshof are a young bull Ferdinand and a young pig Sebastian. Ferdinand managed to escape the inescapable. He was already in the killing box inside the slaughterhouse and just moments before the metal sliding doors closed behind him he somehow managed to turn around put his head underneath the closing doors and push them back up. He then ran for his life and hid in the forest for days. Johannes (the founder of Erdlingshof) organized a search party and found him with the help of a bull Michi who made the first contact with Ferdinand and made him trust Johannes so he could take him to his new home.

According to the previous owner, Ferdinand should be a rogue bull, but that couldn’t be further from the truth. In his new environment, he became a real sweetheart that loves to cuddle. Who wouldn’t be rogue in an unkind and unhappy place from where he came?

Sebastian, the 8-month-old pig was found wandering in the forest, and although nobody knows where he came from he certainly escaped the destiny of others of his kind who never live past 6 months. In Erdlingshof he’ll be free to live into the old age that for pigs can be up to 15 years.

In the end, it wouldn’t be fair not to mention the humans that live on Erdlingshof. Birgit and Johannes who run the sanctuary are really doing a wonderful job and are as humble as it gets. All the volunteers that help them on daily basis, as well as those that help during the public visit days, are super knowledgeable and you can see how much it means to them.

Like most sanctuaries, they are funded solely by donations. The best way to do so is to sponsor them monthly. It can be as little as 5€ a month and you can even choose a resident you want to sponsor. So, you can sponsor Ferdinand or Sebastian as well as any other resident. You can also do a one-time donation. Every donation means a lot. Their website is www.erdlingshof.de. (To translate certain pages to English just right-click and choose “Translate to English” (in Chrome)).

My today’s illustration is dedicated to all the earthlings in Erdlingshof.
Thank you for a beautiful day in heaven and delicious vegan food.