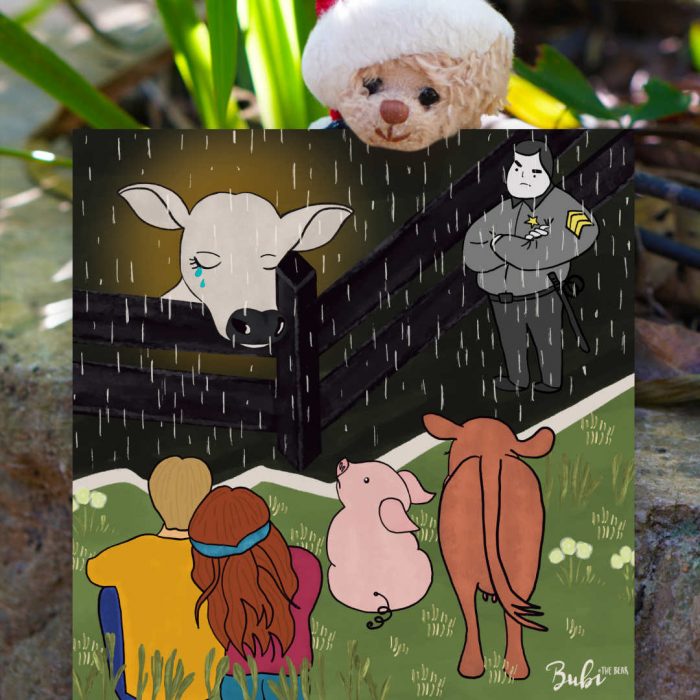 It takes great courage to be kind. Yet, to show love and compassion to someone that is legally not even considered someone but something, a commodity, a thing, sometimes requires an act of bravery.

Sophie is definitely someone. A young baby cow that got badly neglected and mistreated on a farm, was saved by a kind brave person. She was then brought to a “Life with Pigs” sanctuary where she was warmly welcomed by other animal residents and treated with love by the human carers. They treated her infections, gave her proper food and she quickly started to thrive.

But then unimaginable happened, one day police force led by the owner of the farm where Sophie was so neglected came and took her away by force. The owner even threatened the sanctuary that he will kill all the other animals there. He pressed charges against the person that saved Sophie and she now faces a legal battle that could end with her serving jail time.

The police have been shown clear evidence that Sophie was mistreated on the farm and that the sanctuary animals and owners were threatened but that didn’t help as they took the farmer’s side. Even local newspapers were afraid to publish the story.

How can that be? How can police protect cruelty and get away with it? Why would a farmer want Sophie back when he let her starve and suffer?

Because they can. As long as a sentient being like Sophie is considered a commodity, a mere thing, a property, the owner can practically do whatever he wants. That is the sad reality of all farmed animals. What can you do about it?

Battle for Sophie is not over and “Life with Pigs” sanctuary is trying everything to get her back. Please support them by joining over 167000 people that already signed the petition to save Sophie. Besides, if you’re able to donate a few dollars to the sanctuary that would be great.

To make a lasting impact say no to cruelty by choosing animal-free products and plant-based food. Visit and support your local farm sanctuary and meet the animals. Spend some time with them and you’ll not only learn a lot but I’m sure you’ll have a great time.

SIGN PETITION FOR SOPHIE’S RETURN
THE STORY OF SOPHIE
download illustration
Liked it? Take a second to support Bubi The Bear on Patreon!